On the first day of two days festival, the teams of 60 men from Fuuji Shrine carry 10 large mikoshis (portable shrines) and cross the Hikosan river.

And on the second day, people will cross the river again with carrying the mikoshis, which is decorated with illumination and bring those mikoshis back to the shrine.

During Eiroku era (1558 – 1569), when a plague epidemic broke out in Ida village, people prayed to Hachimangu shrine which is the village ‘s goddess.

When the plague epidemic was ceased, people dedicated “Yamakasa” to the shrine as a reward, and that is regarded as an origin of the festival. 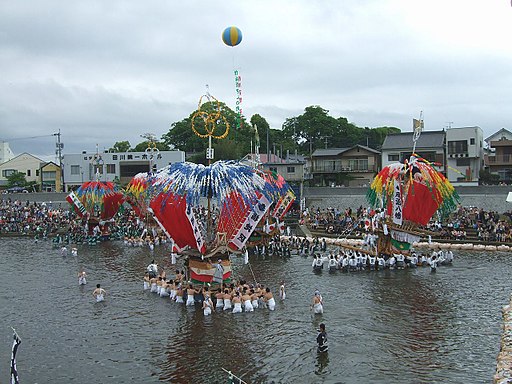 3rd Saturday and Sunday of May

Overview Awa Odori (Awa Dance Festival ) is the largest and most famo...

Overview Gion Matsuri ( Gion Festival)  is one of the most famous fes...

Overview Kemari is a ball game where players keep a ball from touchin...