Uneme Matsuri is the Reisai, the most important festival for shrines, in this case, Uneme Shrine.

It is held to comfort the soul of a female palace attendant who lost the Emperor’s affection and drowned herself in Sarusawa pond during Nara period.

The first part of the festival is the parade at the city center. There will be the beautiful festival floats carry people in costumes of Nara period and playing the traditional music called “Gagaku”.

As for the second part of the festival, after the ritual at Uneme shrine, people got on the boats with gorgeous decoration and float around on the Sarusawa pond which is light up by many floating lanterns.

During the Nara period( 710 to 794 ), it is said that a female palace attendant who lost the Emperor ‘s affection, drown herself in the Sarusawa pond, and Uneme Shrine was built to comfort her soul.

Also, Uneme festival has been held annually for the same reason. 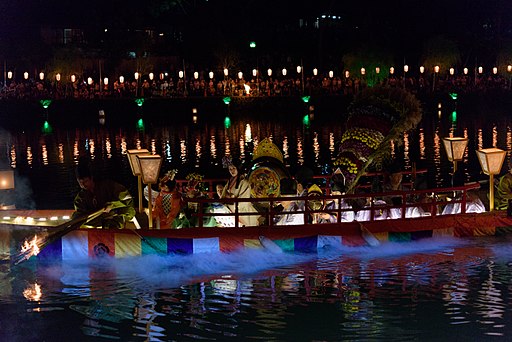 Overview Shinjo Matsuri, Shinjo Festival, is one of the most popular ...

Overview The Aoi Matsuri is one of the three main annual festivals he...

Overview It is worth to see the groups of participants from every19 b...